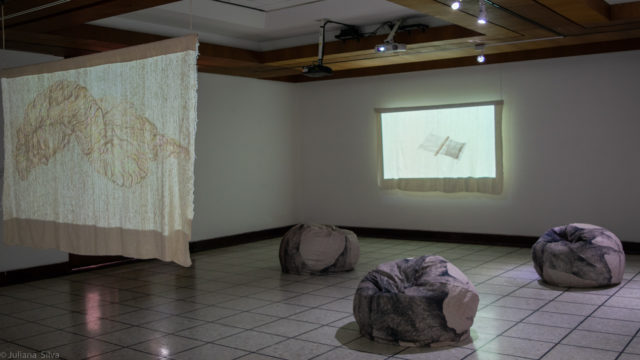 I will follow mysterious cotton blankets found in caves wrapping mummies. Theses mummies belonged to the Guane people, an indigenous group from Colombia.  I grew up surrounded by the mountains where these caves-cemeteries were found. As a child, I heard about these archeological finds but I never really saw any of them. Later on, when I became an adult and an artist I decided to research about these renowned blankets and is where the story started.

The garments tracing the surface of the body are often considered to be second skins, and the patterns covering them always say something about the wearer.

Ropa Blanca is an art project that imparts the story of a cotton textile created by the indigenous Guane people in the northeast region of the Colombian Andes, who were the originators of this ancestral technique.

The manufacture of Guane blankets, exquisitely woven and decorated for funeral rituals, was considered an unproductive activity by the colonial powers who imposed  a European  system of slavery and exploitation that denigrated Indigenous practices. The white linen made with cotton canvas, used by the indigenous and dispossessed peasants, became a social code that identified the poor.

Knowledge of the fabric faded over time, with only a few vestiges of the technique remaining in the cultivation, spinning, and weaving of cotton still carried on by some rural women of the region, who use the fabric to strain the pulp to make guava jelly candy.

This ancestral  textile  technique resists its own disappearance by taking refuge in the hands of rural  women. In Ropa Blanca, this textile represents the history of a culture that refuses to be forgotten.

Comments are closed, but trackbacks and pingbacks are open.